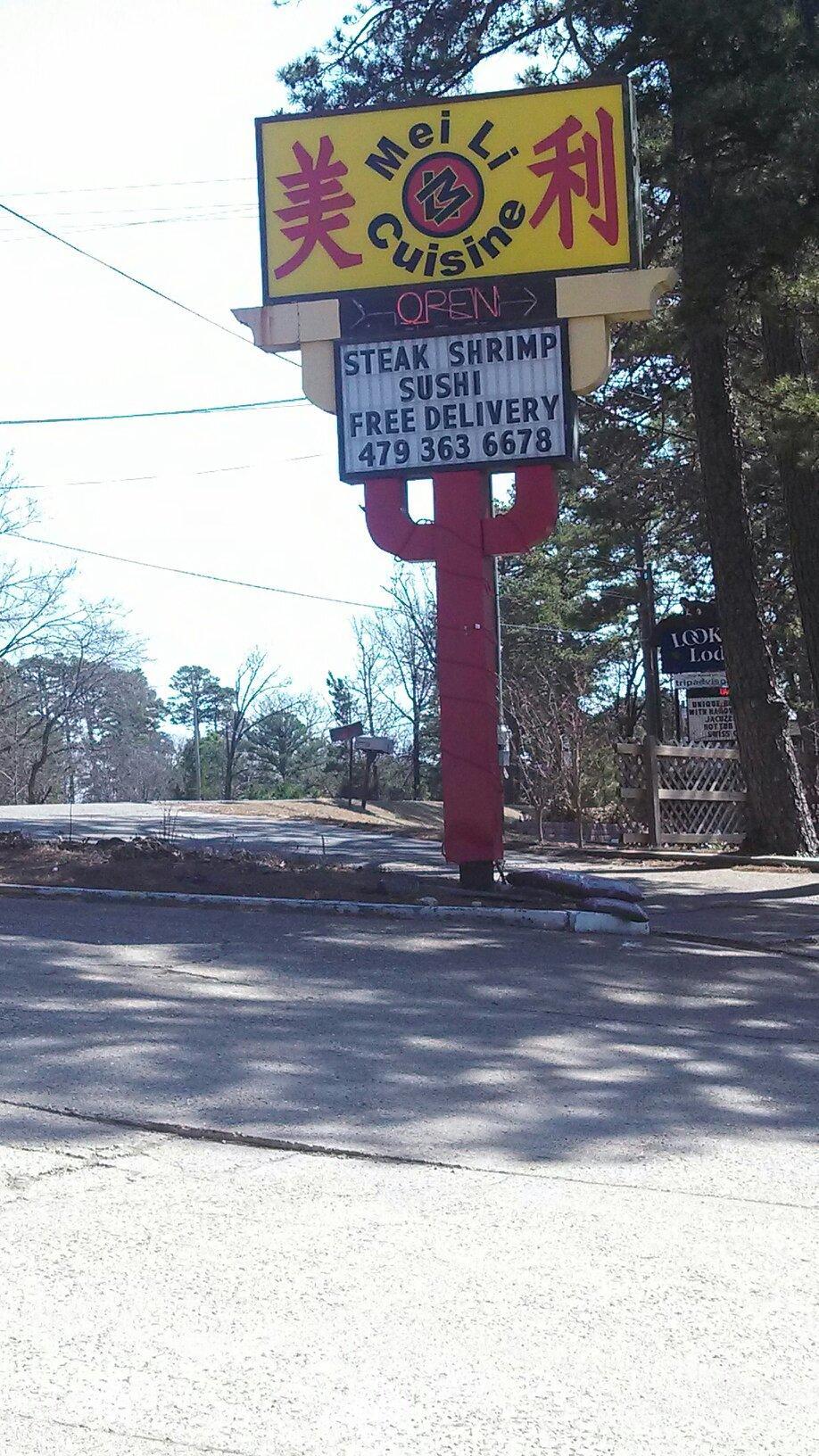 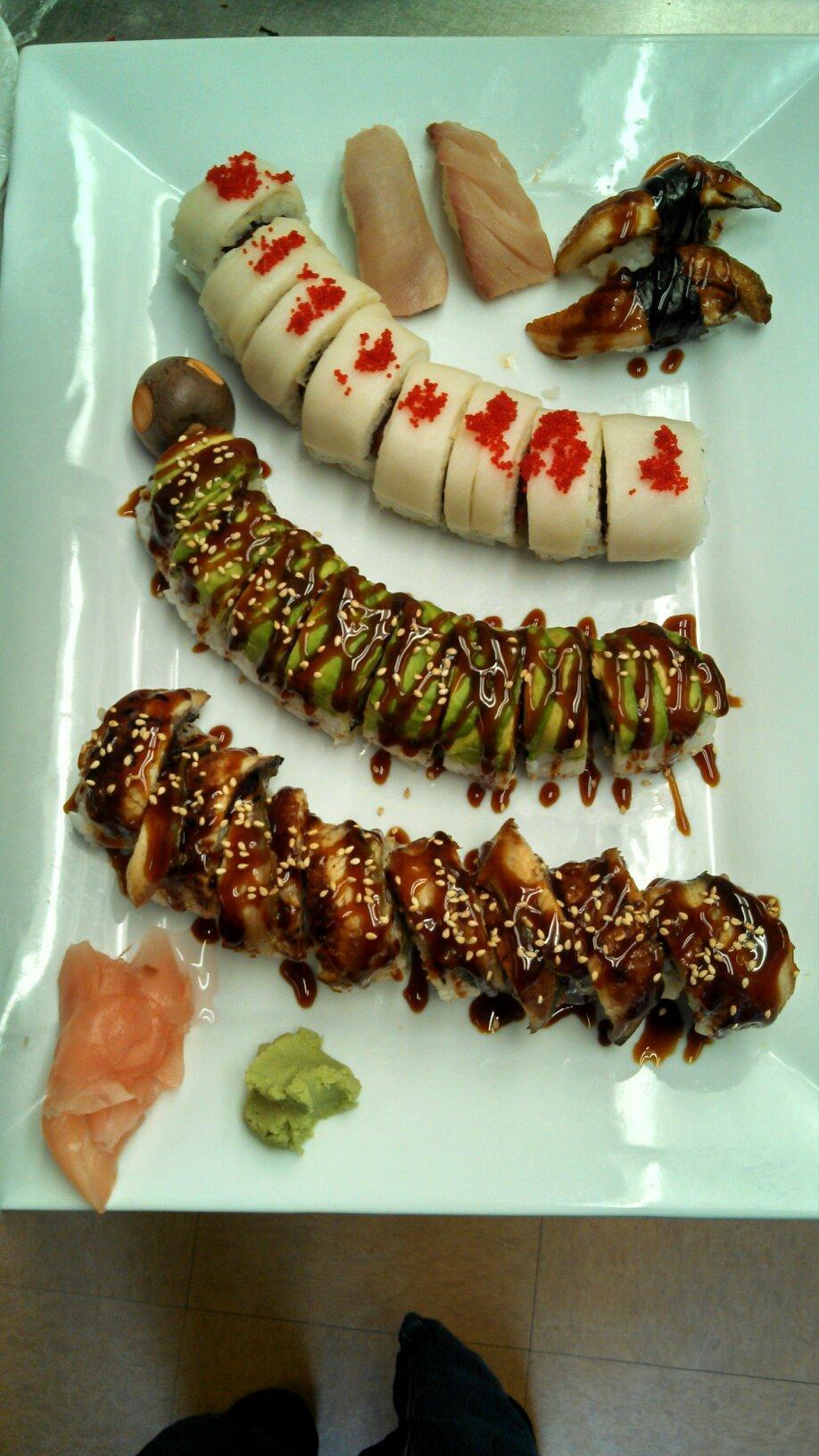 Do they serve dim sum here?

I don't recall seeing it

What are your entrees?

They have sushi and off the menu normal Chinese dishes

Is this a buffet

Quality cuisine at budget prices. Open mondays too. A must!

Good affordable food! Actually not to bad for a small town in Arkansas. But what's up with resturants in Eureka with the decor? Use some paint and a designer and charge more for the food for a better dining experience!

They so real food and very good prix the is so fresh and so many thinks ,habochee, Japanese sushi, thai food too go and try the food here .

Very affordable! The food is great! And now it is under new ownership, the food is even better...

Do not visit Eureka Springs and miss out on this restaurant!!! Wow, you will not regret a visit to this spot, everything on the menu was awesome, Lobster, Crab Legs, Sushi........super great! Very friendly and attentive service..........Go by and enjoy yourself!!

Been visiting here since they opened. My daughter and I have always had great sushi and entrees. Unfortunately, the last 2 times have each just gotten a bit worse. Higher prices, less food, and the vegetable egg foo young was the best I'd had since we left Florida. Not so much anymore, it was small, dense and the gravy was just gross.

I've had 2 experiences here and both tell opposing stories. My first was pleasant with the whole family and the food was up to par for the price. The chocolate cheesecake cake was BOMB. SADLY....the second time we went has ended my family's desire to visit the restaurant. I'm not sure who in the restaurant was different, but they insisted that my service dog was not allowed inside and that we could only dine outside. Quite frankly it didn't matter in the sense that it is illegal to refuse entry or service to someone with a service animal, but the family and I were the only ones there who were about to dine and attempting to make them listen or involving the legal system was more effort than the food was worth.

Sushi was fresh and tasty. Chicken wings had good flavor.

Little ambient Chinese restaurant with friendly service, food was disappointing. Wife had the California roll which was big but dry. The egg drop soup was different as well with big slices of onions in it. Main course wife ordered the generals chicken with lo mein; which I ended up eating due to my order of beef broccoli having mushrooms in it (allergy) chicken was flavored okay and tender, noodles were bland, no flavor, fried rice wasn’t good either. In good faith I couldn’t recommend. I might add it was odd for the waitress wanting my info off my DL, asked her what happens if someone refuses said guess they gotta pay with cash.

Very nice and polite staff. Food was great and came out at the right time.

I would give 0 stars. Worst Chinese food I've ever had. Very disappointed. Pretty much no staff. As I wright this my stomach is churning. Worst part of the weekend by far. Never going back.

This place is AMAZING! I loved every but of food I tried! Service was also stellar! Waitress was all smiles and attentive. Will DEFINITELY be back next time I'm in town!

One of the best Asian restaurants I have eaten at. My wife loved her super-crunchy sushi roll. I had terrific hot and sour soup and combination lo mein. I told my friends on Facebook that I wished I had an Asian food restaurant this good near me!

It wouldn't get this rating, except for one thing... Andy Yang. Sushi? Yeah... He's for real. I've had sushi in some of the "great" sushi bars in the US, Andy blows them all away. Plus, he's the coolest guy to talk with and be around. Now, to be transparent, I haven't had his sushi (if he's even making it) since he's come back to his family at Mei Li, but just knowing he's back there is enough for me. Things got sort of sideways this year at Thanksgiving, so, my roommate and best friend just decided to start our own tradition. Asian food on turkey day. We went to Mei Li first, they weren't "open-open" but the first thing they did, Andy comes up, and invited us to join his family for Thanksgiving. Like I said, just knowing he's there is enough for a 4 star, if I knew he was completely in charge, I'd rate it 5.

Ordered the Sesame Chicken entree for takeout (it would have definetly gone back if dining in )...the Eggroll was overcooked, the fried rice portion was very small and was not fried rice, the Sesame Chicken was literaly Breaded Chicken Nuggets with small amt.of sauce and Sesame Seeds sprinkled on.All of this for a higher then average price.

The place was nice and warm and the service was decent especially since one lady was working the floor but the food was not so good, edible but eh. Cashew chicken had no flavor and it literally tasted like chicken in water, the chicken pho ...I thought I took a bite of crab but it was chicken, they gave a small portion of bean sprouts, shrimp just tasted like well boiled shrimp with no salt or flavoring.So far The only good thing we had there was the wonton and egg drop soup.

The food was very good and the service was very fast.

The all new Mei Li. The sushi was great, went with Andy's recommendation and it was awesome. Not only was the food great but Andy made you feel right at home, I felt like I was family. Thanks

Absolutely love coming here and I think my daughter loves it more. She definitely loves the sushi!

I've eaten here a few times over the years, but today will be my last time. $14 for what should have been a lunch plate. Very little food in each plate. And the food was not good. It tasted like frozen Chinese food slathered in too much sauce. Panda Express is better and I don't even like Panda Express.

The service is iffy depending on who is working. But it's decent quality. Prices hover between 6$-15$ at most. 6 is the lowest without adding protein (such as meats). It's an additional 1$-2$ to add protein. Now to add seafood you will have to look for yourself. I like to get the Mei Light Cashew chicken often.

Great little restaurant. We got in to town late and they were about the only place open. We were surprised how good the food was. Some of the best Hot and Sour Soup I have ever had.

First time everything was so good And beautifully prepared

Great service, food was very tasty. Place clean. The taste was different then that of buffet style I'm use to or I would have given 5 stars.

Really nice place. Good food, good service. Five stars all around. A must have dine out for special occasions of all types. Set in a beautiful location with many attractions and activities to attend to.. this restaurant isn't the only thing you'll be visiting.

Yum, yum, yum. Just go there. Your tummy will thank you! The sushi (not pictured here) was surprisingly delicious. The entrees come with an egg roll, your choice of rice, and a cup of soup. Great prices! Staff was super friendly and helpful.

The kindest people ever. The food is to die for. Been my favorite restaurant in town for years now :)

This was our first visit to this restaurant, and although the sushi prices were a little more than I generally pay, we were very pleased!We especially liked the Firecracker roll, and the waiter was very accommodating when we requested it without jalapenos.Our order was everything we expected it to be and more!I would definitely recommend this place to anyone who likes sushi😁

Very good food and the sweetest waitresses! The Pho was Delish!

Great place to dine. They had pictures of their food which was very helpful and the service was very kind.... Great food by the way😁

Love the service and adore the food. It's always a very warm and welcoming place to go and just enjoy yourself. Will always recommend this place to everyone!

I came in to try some Thai food. I was surprised they had Ka Poon noodles soup on the menu. I ask the waiter who owns this place and was surprised it was a Hmong family. I instantly had to try it. Coming from a Laos family I had to try it. The Ka Poon was on point! Enjoyed it very well. It had fresh shrimp, chicken, and bamboo shoots in it. A very delicious bowl. I highly recommend it.

Great service. The pork gyoza a wan-tons were the best I’ve had. Very crispy! I really enjoyed the Godzilla roll. It’s a lot of food so don’t order two rolls right off. Added the menu as I couldn’t find it online anywhere else. Enjoy!

Not sure were to start. Price? Beyond high! Food quality, worse chinese food you will ever eat. Portions, an entree is that of what a child would eat. The meat they use was stringy, rice was mushy, I mean all the way around it was just bad. 4 bites into mine I was done, wife didnt make it that far. My advice/review, avoid at all cost.

Mixed review...my partner got stirfry garlic chicken and liked it. The egg rolls were tasty if small. My red curry, however, left much to be desired. It looked like a bowl of chopped veggies. Only when I dug down did I find the curry sauce. And it was quite bland. I couldn't finish it even though red curry is one of my favorite dishes. Service was good and prices reasonable.

Worst meal I have ever had. Could not eat it. I threw it away. It was a waste of money

Been going there for years. Miss some of the old staff but it’s still good.

Small and quiet restaurant with excellent service and food, enjoyed our dinner immensely.

A GREAT place for sushi and all entrees.So many choices including orange/lemon chicken, curry, and mo goo gai pan. You'll eat until you explode.